Sexual assaults in the work place 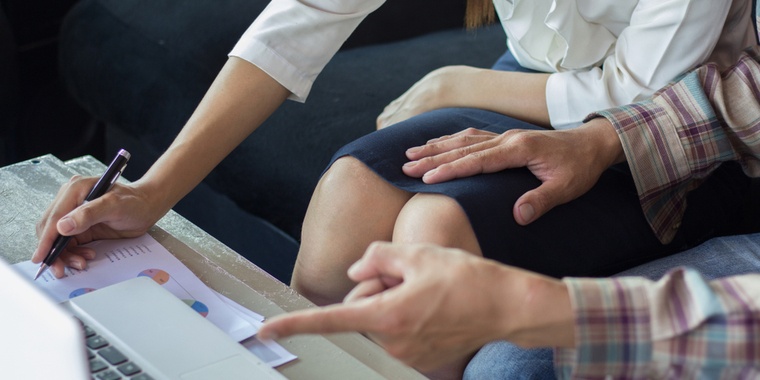 Each form has been experienced by many in the workplace and can almost seem commonplace. Although women seem to be the most common target of these types of harassment, men can experience them too.

In some environments, these behaviours may be accepted as ‘banter’ and joking around, but where it is unwanted it can cause a great deal of distress, through embarrassment, intimidation, isolation and exclusion.

The high-profile case of Harvey Weinstein, the Times Up and Me Too movements have catapulted the issue of sexual harassment into mainstream media and started a conversation that should bring with it a higher level of awareness of the extent of sexual harassment that takes place and goes unreported.

In January 2018, a charitable organisation by the name of the Presidents Club held a ‘men only’ dinner at the Dorchester Hotel in London which attracted much attention in the media after undercover journalists from the Financial Times who posed as hostesses at the event reported widespread sexual misconduct.

Hostesses were asked to sign a non-disclosure agreement before the event and told to wear skimpy outfits with matching underwear. They were subject to groping, lewd comments and propositions by diners at the event.

Since the events that took place at the dinner have been reported upon, the President’s Club has announced it will be closing down and have issued a statement that allegations would be investigated fully. Great Ormond street also announced that they would be returning previous donations from the event while The Charity Commissioner is having an urgent probe into the conduct described at the event.


Sexual harassment in the hospitality sector

In the light of this event and the discourse in mainstream media, Unite Trade Union conducted a survey surrounding sexual assault in the hospitality sector titled ‘Not on the Menu’ which closed in February. The survey found that:

Along with the concerning extent of sexual harassment in the hospitality sector, the lack of implementation and enforcement of policies in place to protect employees from sexual assault were highlighted. Many employers do not have a sexual harassment policy in place or a refined complaints process which leaves employees reluctant to report harassment and leads to a culture of acceptance that it is just ‘part of the job.’


Options for the employee

The Trade Union Congress in conjunction with the Everyday Sexism Project published in a report in 2016 in which it was found that more than half of women in employment had suffered sexual harassment in the workplace. Of these women however 4 in 5 of them had not reported the abuse due to a variety of reasons such as lack of confidence that the complaint would be dealt with and taken seriously and fears that it would have a negative impact on their careers and work relationships.

If an employee experiences sexual harassment they should first consult their company’s policy on sexual harassment if there is one to ascertain whether a complaint should be made in the first instance to a manager, someone from the Human Resources department or a local trade union representative. The employee should be permitted to be accompanied by a trade union representative or a fellow work colleague. The employer should always follow the Acas Code of Practice on disciplinary and grievance procedures. If the grievance is not satisfactorily resolved the employee can choose to make an employment tribunal claim against their employer within 3 months of the most recent event occurring.

The limited time frame and criteria for bringing a claim to tribunal may restrict the employee from resolving the situation. Another option would be to bring a claim against the perpetrator themselves under the Protection from Harassment Act in the civil courts. The time limit for bringing such a claim is much longer (6 years) but you must show that the harassment occurred on more than 2 occasions.

Victims of sexual harassment and assault in the workplace may be able to bring a personal injury claim for compensation against the employer. If pursuing this route, it will be necessary to show that a psychological injury has been caused such as anxiety, depression and that the employer has been negligent, for example in the event that they have failed to act on complaints.

Alternatively, it may be open to a victim to sue the perpetrator of the assaults personally.

In 2013, despite a 70% opposition to the government consultation, parts of section 40 of the Equality Act 2010 were removed which placed a duty on employers to protect their employees from third party harassment and allowed employees to bring a claim against their employer if they had not taken reasonable steps to prevent the harassment. There have been calls for this to be reinstated by many organisations and a petition on this subject attracted more than 100,000 signatures.

The removal of this section of law seems to have given rise to a sense of complacency with employers, some of whom do not even have a sexual harassment policy in place in their companies.  Granted, that employers perhaps should not be legally responsible every time an employee is harassed, however when an employee brings their concerns to their employer and nothing is done they should be held accountable for their inaction. It is clear that employers should do more to ensure the safety of their employees in the course of their employment from harassment as the recent media attention has highlighted the lack of protection.

The following organisations can provide support for those who have or are experiencing sexual harassment/assaults in the workplace: