APIL is a non-profit making organisation that has been campaigning and fighting for the rights of injured people for over 25 years. The Association of Child Abuse Lawyers (ACAL) is also a non-profit making organisation, which was set up to support and assist victims, lawyers, and professionals involved in obtaining compensation for those who have suffered abuse (sexual, physical or psychological) abuse as children.

This popular annual conference - now in its 10th year - attracted over 80 delegates (solicitors, barristers, experts and others involved in this area of law) from law firms across England and Scotland. 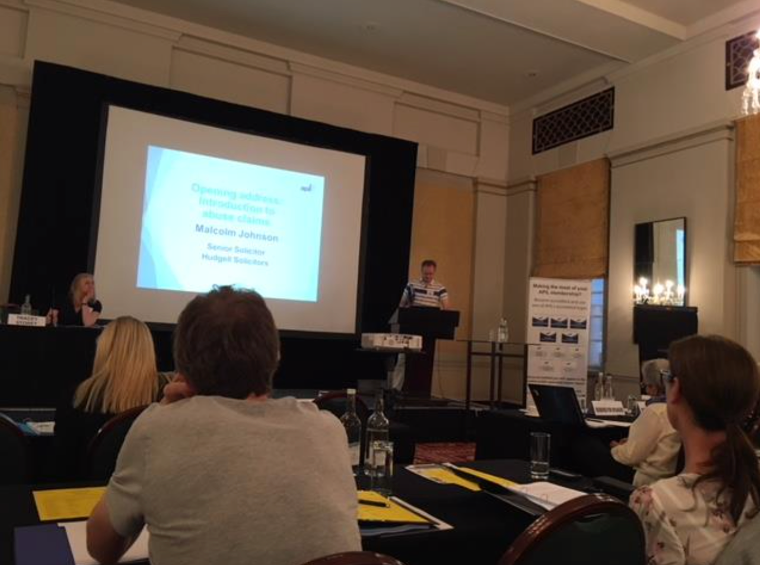 The opening address, “Introduction to abuse claims” was given by Malcolm Johnson, Senior Solicitor, Hudgell Solicitors and a founder of ACAL.

Malcolm gave a very interesting presentation reminding delegates of the background and development of child abuse law. Malcolm dealt with many issues that child abuse lawyers face on a day to day basis including limitation, and the role of the Criminal Injuries Compensation Authority.

Malcolm also reviewed the history of the case law including many landmark cases over the last 25 years and what he views on a “backlash” following the extensive media coverage of the Jimmy Savile allegations and subsequent coverage of prosecutions of high profile people.

During the day delegates heard from a number of other eminent speakers including :

Emmott Snell Solicitors would like to thank APIL/ACAL for hosting an enjoyable and informative conference which was enjoyed by all.