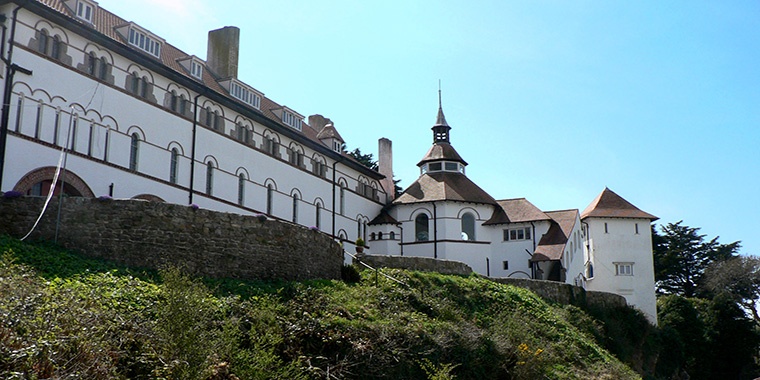 Editor's note: Since we reported successful compensation claims against the Cistercian Order in 2017 in respect of six survivors of abuse by Father Kotik Thaddeus, a monk on Caldey Island, more survivors have come forward.

It is reported that over 20 survivors have now disclosed abuse suffered at the hands of monks. Claims of non recent abuse involving priests and religious figures are being re-investigated by police. A public inquiry is being called for, 5000 signatures having been obtained on a petition.

It is hoped that a public inquiry will shine a much needed spotlight on the child exploitation that occurred on Caldey Island, to learn lessons from the past and prevent future failings. As important it is vital that survivors are heard and can find justice and much needed resolution.

Caldey Island is an idyllic, remote island situated two miles offshore from Tenby on the Pembrokeshire Coast, Wales, owned by the Cistercian order of monks.

The monks on the island take vows of poverty, chastity and obedience. With a population of just 40 permanent residents, the island has been a religious retreat since the first monastery was set up there 1,500 years ago and attracts almost 3,000 day visitors a year.

Last year, the island featured in the national media when it was claimed the first ever recorded crime had taken place there.  A visitor struck his seven year old son during a visit to the chocolate factory.  Ironically, at the time there were claims that the behaviour amounted to child abuse.

However, beneath the peaceful exterior of the island, serious crimes were taking place against children that went undetected for several years.

Six women suffered sexual abuse as children between 1971 and 1987 at the hands of a monk named Father Thaddeus, who died in 1991.  None of the women can be named for legal reasons. Some of the women have moved independently to Australia.

The assaults were of a serious nature, including penetration, and at the time the girls were aged between only three or four and adolescence.

The monk created opportunities to be alone with the girls in areas where the public were not allowed. Typically, he would take them to secluded woodland, remote caves or beaches, or to religious shrines which he had built around the island. He told one of the girls that if ever they ‘betrayed’ him and told anybody of what took place, God would send them to hell where demons would pluck out their eyes.

Allegations, and the Caldey Island's response

In 1984, a number of islanders expressed their concern to the abbot at the time, Father Robert. He presumably accepted that the abuse had taken place since he directed that Thaddeus should be punished. But the punishment was being ‘confined to the enclosure’, which is to say that for a period his freedom of movement was restricted.

In 1990 one of the girls reported Thaddeus to her school in Swansea who took up the matter with Father Robert.  He promised to look into the matter, though he was already aware of it. Afterwards he claimed Thaddeus was too ill for any further action to be taken.

At no time did Father Robert report these allegations to the police.

Most of these women have suffered greatly throughout the long years since the abuse occurred. They have been variously diagnosed with anorexia nervosa, post-traumatic stress disorder, depression and borderline personality disorder. They have undergone self harm and substance abuse, relationship difficulties and some have undergone significant psychological treatment.  Unaware until their legal action that others had suffered similarly they felt isolated and ashamed.

Like most victims of child abuse, no ever ‘gets over’ it. The experience leaves terrible and life-long feelings of guilt and few of those who survive it go on to leave untroubled lives.

Denied of any justice in the criminal courts, the women many years later eventually used the civil courts to try and achieve acknowledgement of their abuse and justice.  Speaking out against a monk of a religious order and a community clearly much revered and respected in the local area took enormous courage.

Their civil claims against the Cistercians on Caldey Island were protracted, the Abbey consistently refusing to deal sensibly with the claims brought. In the end there was no alternative but to issue court proceedings which prompted further attempts to avoid the claims by claiming the abuse was out of time, as the alleged abuse happened too long ago and the key witness Father Thaddeus was dead.

The six women finally secured out-of-court compensation settlements which ranged in value but were relatively modest, in no way reflecting the true extent of the harm done.

Request for an apology

We sought to obtain an apology from the current Abbot in conjunction with the out of court settlements, but this was not forthcoming.  A straightforward acknowledgment of the circumstances of the abuse and that Father Thaddeus’s victims were harmed as a result of it would go some way to repairing some of the damage done.  It is still not too late for this.

Nothing can undo the harm that these women suffered and the effect that it has had on their adult lives, nevertheless the settlements provide a sense of closure and justice and allows the victims to start the process of healing and recovery.